Oh yes...you heard me! I received my first shipment of fabric today....oh how my heart fluttered as I heard the UPS man knock at the door! Believe me when I say there are several more shipments coming, but for now I will revel in the beauty of this one.

These first 4 fabrics are "for sure's" in the inaugural line. Hopefully adding to the wildly diverse range of styles included! 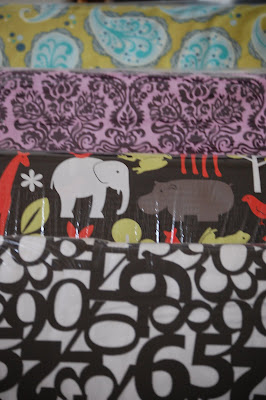 The next 3 selections are choices that I chose to order sample yardage of. There are a few "kinks" in the possibility of them that I will need to "craft out"....seeing if they, in fact, might fit for the line.

The bottom choice (cream) does not photograph as beautiful as it is in person. It's an organic cotton fabric in a soft creamy beige herringbone pattern. A.MA.ZING! 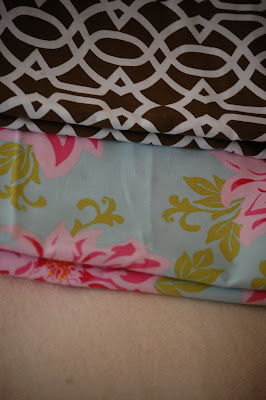 What? You still haven't seen photos of New York from my trip? Well then...by all means let me begin!

And to begin I will give you the piece de resistance! My run in Central Park. I am fairly certain I could've continued jogging around that park all day long. However, we had an entire city to see in a matter of hours...so a few miles was all we could do. But it was amazing, the scenery was gorgeous and the people watching was even better. 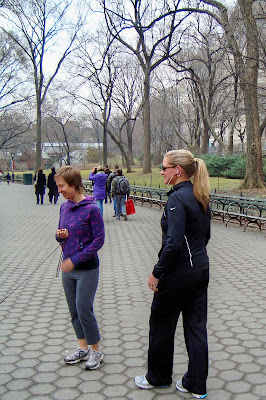 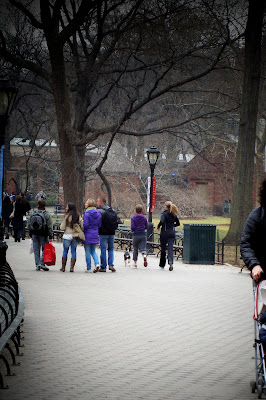 We learned that Sat. morning that in New York breakfast is really not their thing...especially on a Sunday. So instead we planned to catch brunch after our run. Led by our tour guides, Laura & Verge, we were whisked to a quaint yet hopping little neighborhood (to which the name is escaping me...big surprise) to search out the perfect spot!

We stumbled upon this shabby chic looking Norwegian spot...looked at the menu and called it good. However as we entered we were greeted by a completely different look. Eclectic mixes of bottles and serving ware adorned the tiny seating area; Even a tree was erected in the middle. 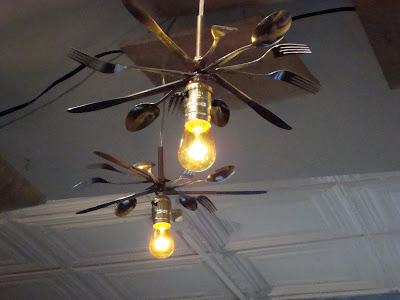 The brunch of assorted egg styles, potatoes, and beverages were magnificent. Truly a little gem of a place. The Riskrem for dessert and coffee made my tummy sing! 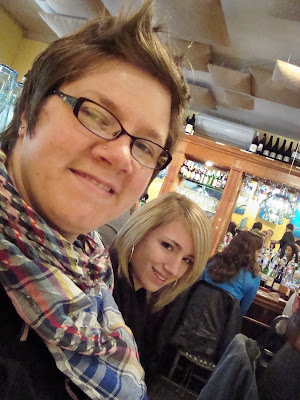 After our brunch we proceeded out to the city for a full day of shopping...this being the end result! 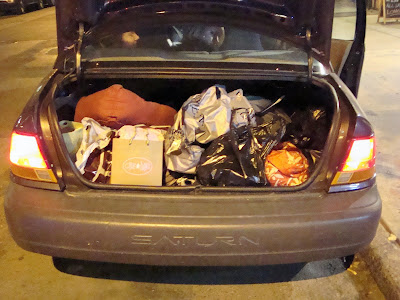 Tired feet and empty stomachs we, again were led by our tour guides to yet another amazing food stop. I believe this was either in or near Little Italy, and the food & wine was great. An artichoke salad, wild mushroom salad, and 4 different pasta's later (oh...and 2 bottles of wine hehe!) we were full and ready to head to the apartment for bed. 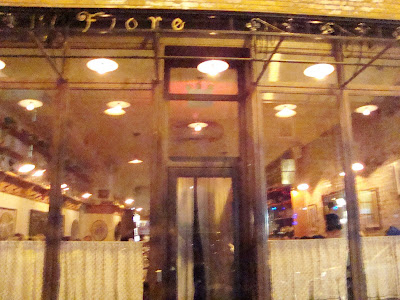 Reg, of course, needed to say goodnight to her beau back home....sat amidst the city lights on the fire escape...looking so young and so old all at the same time. Reg....stop growing up please!! 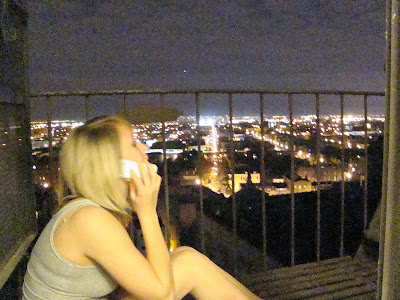 A couple of nuts, Ashley and I could not hold ourselves back from joining her for a photo. Of course at first, I was scared to death that the rusted 'ol fire escape would hold...but it did!

We were all showered and ready for bed...a big (which means darn early) morning ahead of us!

Dad...this photo is for you..."From one fire escape to one who escapes fire"...is what we titled it! 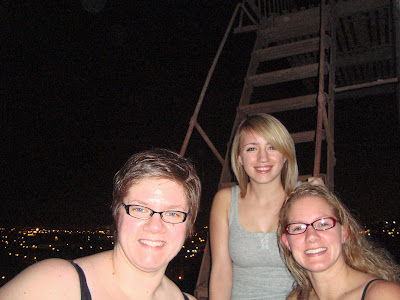 Lights were out...we were all nestling in for the night, but I couldn't help myself. On went the lights...out came the camera...and a ton of funny moments would ensue!

I wanted to try and capture the small nature of this one bedroom apartment, but I don't really think this photo does it. The mattress on the floor abuts the couch...and that's it! That is the entire width of the living space! 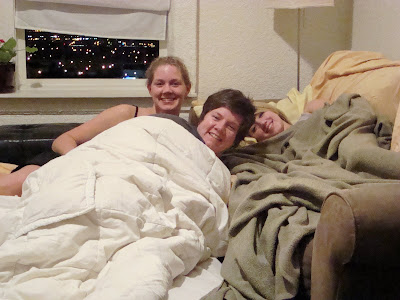 But before long...even the serious one was laughing. We were dead tired! Ashley had not slept but 45 min. a piece all of Friday night...and we did not retire until after midnight on Saturday night. So...by this, Sunday night at 2:00am, we were ready for a little shut eye!

Look at the gorgeous city lights that our Hostess' get to enjoy every night! 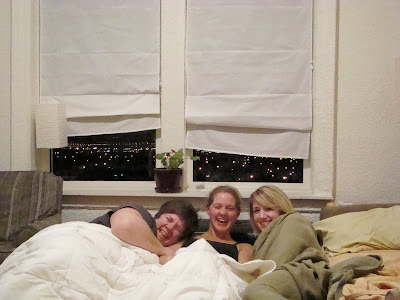 The coffee pot (working as an alarm for the senses) woke us bright and early Monday morning (about 5:30), so that we could get to Manhattan to see the "Today Show." I know...corny...but when we used to watch TV I would tune in each and every morning to get my fix of what's happening. 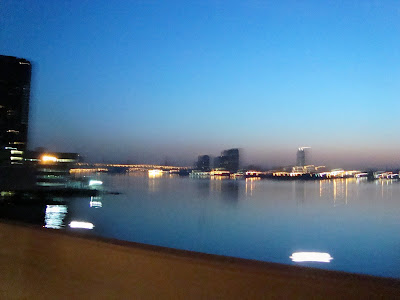 Since then...it was always yet another dream of mine to go to Rockefeller Plaza and get a Dean & Deluca coffee...sit ringside and see the show. Well, cross that one off my "bucket list." The coffee was so-so, the show was a bust, (Meredith and Al were in Ireland for St. Pat's day and Matt and Anne were on vacation) and the temp was down right chilly! We did get about .30 second of air time in the crowd and a "today show" St. Patricks day button! Chalk it up to experience for me. 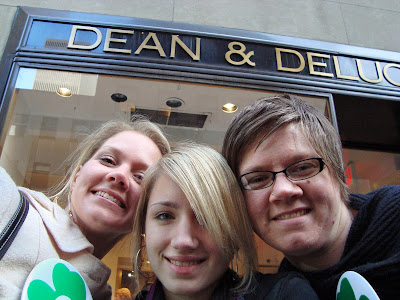 Our plan next was to fulfill one of Reg's dreams and head to "Mood" fabric. We were running a bit behind, (we chose to not take the Subway and walk the 20-some blocks to our next destination) but we stopped and got a feel for where it was. Our plan was to head back after my appointment. We then head to my Appointment and boy...I was blown away. Baby Elephant Ears was coming to life. We had a person to meet with and chat fabric to. She was an absolute encouraging help to us..and well...sold us a heck.of.a.lot of fabric! We returned to Mood (again by foot...burned a few cals for sure!) where Reg bought some amazing pieces of fabric to make her prom dress. Believe me I will show that later...she is amazing! 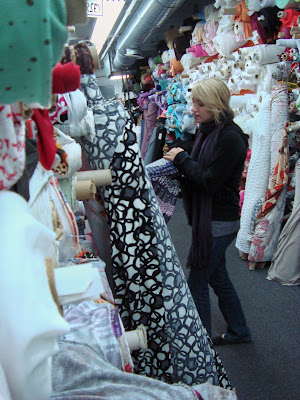 That was it. We then had to head out of the city before traffic hit for the night...ADIOS NYC!

All was going very well until we arrived in Pennsylvania...there was a horrible accident and what should have taken 10 min. took us over 4 hours! Below you will see what Ashley and Reg did during that time. I, of course, was driving the vehicle (that was a manual) at turtle speed! Praise God we were about 25 minutes behind the accident... 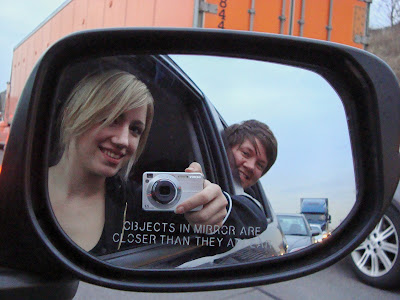 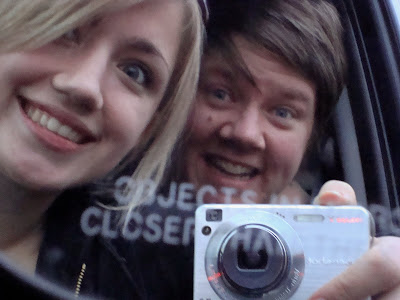 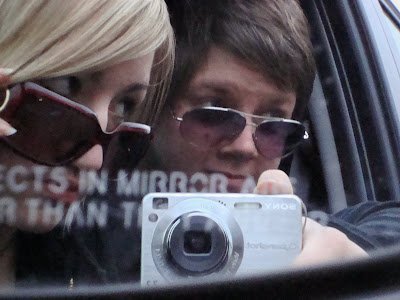 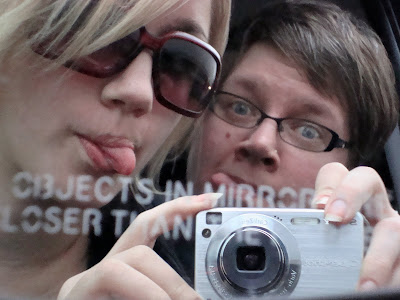 The next hours were very blurry...as Ashley and I attempted to drive through the night to get home. We went through a rain storm and many driver changes. We ended up having to switch about every hour in order to stay awake. After all of that caffeine (coffee, soda, 5 hour energy) our guts were in a tailspin. So...at the opportunity to hit a Sonic (our first time ever...oh how I have dreamt of this day) I pulled off at a moments notice! Oh how divine it was!

At that point we were just short of Chicago and had about 6 1/2 hours to go...we hit it hard and got home as quickly as possible! 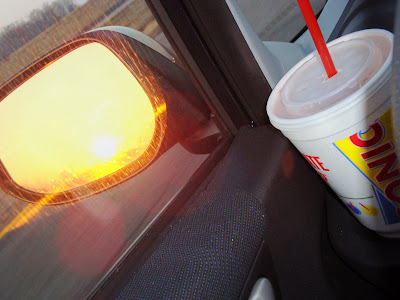 What a ride! It was great...and terrible...all at the same time. I will probably never do that drive again, but I will definitely spend copious amounts of time with my sisters any day! Thanks ladies...it was a blast!

And to sweeten the deal....I got home and settled in. As we were getting dinner on the table I put Pearl in the highchair so that I could get milk and cups for the table. As I began to walk away she muttered for the first time "ma ma!" That sweet angel! She clung to me so hard when I arrived that she began drooling in relaxation!

I definitely missed my babies... 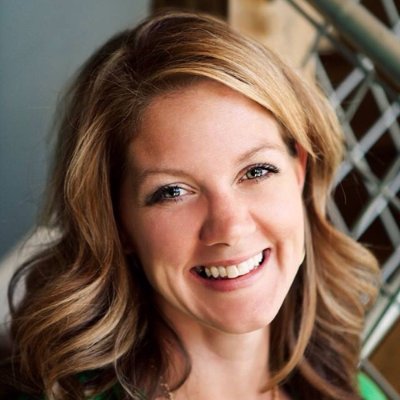 Alicia is wife, mother, and creator of Baby Elephant Ears. Baby Elephant Ears was created out of parental concern, not financial desire. In 2005, when their second child was an infant, he cried all the time and just couldn't seem to get comfortable.

After seeking advice and suggestion from the medical community and alternative medicine, they eventually ended up in the chiropractors office where their baby was successfully treated for a subluxation, discomfort most likely the result of the strain during labor, which was now being exacerbated by the normal lack of infant neck strength. Only proper neck, head, and back alignment would offer him relief. When they couldn't find a product to give their baby the necessary support, Alicia took matters into her own hands and crafted her own infant support pillow. The first Baby Elephant Ears was born!